“You are too pretty to frown so much,” Cecily heard from behind her.

“Excuse me,” she sighed. Cecily only gave a cursory scowl over her shoulder before she continued to scan through her mail.

“Don’t shoot, I was just stating facts. Every day I see you, a smile seems to be misplaced.” The guy elaborated.

“So, you are watching me now. What are you the smile police?”

“Nah, just your friendly neighborhood smile watch.” He countered. She tried her best to choke back the giggle at his lame comeback but from his reaction she didn’t do a good enough job. “There goes a small one. I guess I will have to try a little harder next time.”

“Who says there will be a next time?”

“Seeing as we live in the same building, there is bound to be a next time.”

“Damn, first a pig and now a canine—do you have something against men?”

“Only the canine’s that should be put down but I meant no offense to you seeing as I don’t know you.” Cecily didn’t even know why she kept up the conversation with the stranger for so long. Maybe it was the extreme bouts of loneliness that she suffers from.

“Would you like to get to know me?” He asked.

“I never said that,” she said facing him full on for the first time. Her breath was literally knocked out from his appearance alone. The stranger was akin to the sexiest black man alive addition of any male catalog.

“Are you all right?” He quirked a brow at her. There was no shame in his game as he visibly undressed her from head to toe.

“Yes, why wouldn’t I be?” She tried to recover from mentally undressing him.

“You never said no, does that mean there is a possibility to getting to know me?” He grinned.

“What? No,” she adjusted the scrub top she had on.

“Are you sure?” He asked. “Last I checked, no one eye rapes another person unless they are curious to what’s underneath the layers.”

“…” Cecily was absolutely speechless at his observation.

“Why so flushed? It’s quite all right to be attracted to a stranger. Cause I am not ashamed to admit that I have imagined doing some things to you since you moved here.”

“That’s not creepy at all,” she blushed.

“I know you aren’t a virgin so you must be frigid.”

“What the hell?!?” She shouted. “Who the hell asks a question like that?”

“It was a simple observation. No disrespect,” he chuckled.

“Goodnight sir,” she brushed past him. There was no way that she would admit to thinking about his offer. If that could be considered as an offer. He only suggested she get to know him, he never flat-out stated ‘let me take you to bed.’

“See you around Miss Cecily,” he called after her.

“I know everything and everyone inside of these walls.” He smirked before walking away. There was something about him that ruffled her feathers and made her want to try something new in the same breath.

Two weeks later, the mystery man was still heavily on her mind. Every day she would linger around her mailbox in hopes that he would appear. Only three out of the fourteen days did he suddenly appear. Once again, he was all flirt, all talk, and each time Cecily would pretend to be disinterested. He would chuckle and continue about his way, never appearing too pushy.

The sad truth was that Cecily was more than interested, she was curious. Curiosity certainly killed the cat but would this curiosity bring satisfaction back to her world. Besides losing her virginity to one of the grounds keepers that once worked for her father, she has never known pleasure in the sex department.

One night after a long day of rounds, she found herself a little tipsy thinking about her first encounter with Raul. Somewhere in the mix, the mystery man replaced him and it felt different to touch herself with him in mind. She didn’t know his name, she didn’t know a thing about him but she could testify that he was F.I.N.E.

From a medical standpoint, fine, could stand for seriously infested and full of infection. ‘That’s why they make rubbers,’ she thought to herself. As a matter of fact, she had a drawer full of rubbers and dental dam in hopes that she would get lucky one day. So far luck was not on her side because no one has come close to taking a dip, that is until bantering with said man at the mailbox.

“Who the hell…” she hissed from the interruption. Thanks to her very own hand, she was so close to having the best self-induced orgasm. Quickly grabbing a robe, she marched to the front door ready to do war with whoever dared to mess up her flow. The wind gushed out of her sails as her eyes landed on the culprit that knocked her out of her sexy daydream.

“My apologies, am I interrupting something.” He asked while shamelessly scanning her skimpy choice in dress. Her cheeks instantly flared because she was really just getting off to the thought of him.

“What can I do for you?” She breathlessly asked.

“Unless filling you up is on the menu, I would suggest that you close your robe a little tighter.” He chuckled at her inflamed cheeks and bashful demeanor. “Furthermore, you called for maintenance to fix your shower drain.”

“Uh yeah, the water is backing up. Wait, you’re maintenance?” She asked skeptically.

“In the flesh, may I come in or would you like for me to come back when you are decent?” He asked. “Personally, I prefer you just as you are but it’s not up to me.”

“What the hell,” she opened the door wider for him to enter. “You certainly have no shame whatsoever.” She scowled.

“Did I pick out your choice in cover? No but if it were up to me, I would prefer all skin no cover. Did I force you to answer the door? No but I am happy you did so I could get a glimpse of what’s under the scrubs. Did I invite myself inside? No but I do have a job to do.” He spun around asking a flurry of questions and supplied the answers as well.

“…” Once again she was speechless.

“The master I presume,” he said. Cecily was finding it hard to find the right words because she was stuck in a lustful loophole. What was in the master? Her bed, the sexy ambiance that she set up for herself, wine… “Did you change your mind?” He asked.

“Huh,” she was puzzled. Did he read her mind? Did he know where her filthy mind took her? That was impossible.

“Do you still want me to take a look at your drain?” He asked like she was dumb.

“How many glasses of wine did you consume?” He chuckled and walked to the master suite. It was then that Cecily thought about what was behind that door. She instantly knew he had some smart comeback but he surprisingly kept it to himself.

“All done,” he announced successfully snapping Cecily out of her daydream. She reverted back to thinking about how vivid she could conjure him into her bed.

“That was fast,” she panted.

“There was nothing to it, you have to be careful with the caps to your shampoo and body wash bottles. One was stuck inside of the drain blocking the water flow.”

“Craig and it was no problem, Cecily.” They shook hands but neither let go when the introductions were complete.

“I’m sorry you had to come up here over a cap. I hope I haven’t ruined your night.”

“The night is still young actually and as I stated, it was no big deal. I was just doing my job.” He smiled. His white teeth were perfect against his chocolate skin. The beard outlined a perfect set of lips that Cecily knew she would dream about later. “Hopefully, I didn’t ruin your night. Company?” Craig spoke lowly. There was no mistaken the seductive tone to his voice.

“Uhm…” Cecily cleared her throat in hopes of hiding the blush. “No company, I haven’t become acquainted with anyone here, yet.”

“What a shame?” Her eyes were instantly drawn to his bottom lip between his teeth.

“It’s a shame that you consider me as just anyone.”

“You could,” he quirked a brow.

“I just learned your name.”

“I can make you scream it,” he squeezed the hand he still held.

“You are mighty sure of yourself,” she swallowed hard.

“…” Cecily wanted someone to slap some sense into her because her mind was a muddled lustful mess. She wanted it and he knew it.

“I guess I should get going,” he pulled away. It was too soon if she had anything to say about it.

“Or…” She found herself saying.

“You could have a drink with me so I don’t have to drink alone.”

“A drink is the last thing I want if I stay. You and I both know what is bound to happen if I don’t leave now.”

“In that case,” she said before taking the half-full wine glass to the head. “Your preference was no cover, correct?”

“Fuck…” He scanned her naked body with great interest.

“Condoms are in the nightstand.”

“I certainly hope you can free mine.”

“Lay back and watch me work…” 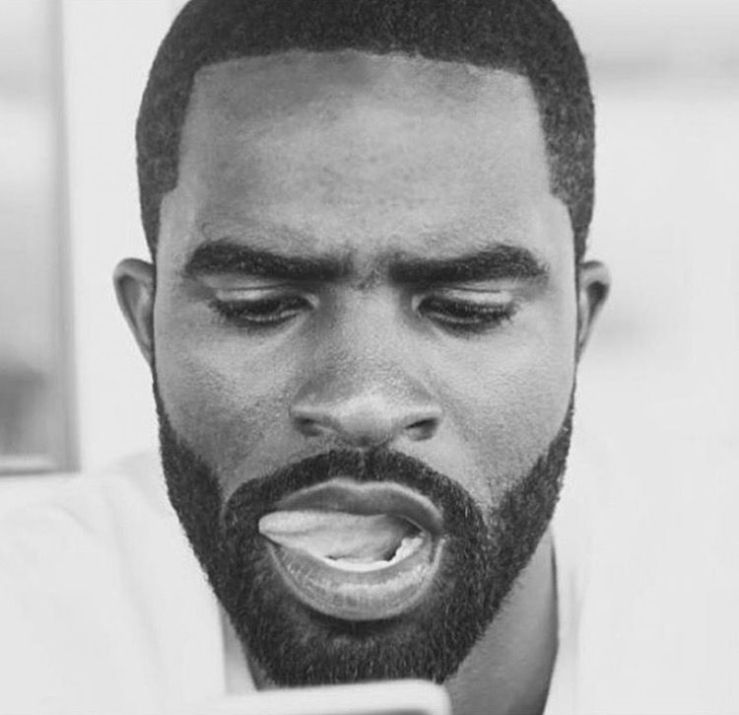 Tell me what you think thus far… This is the image of a man that I am going for. Too bad I can’t find any more pictures for this fine, chocolate bearded brother here but I shall continue to look. So don’t get hooked on him cause he has to change. I need someone with various shots. Taking all suggestions…

Sorry about the slow rolling but I got busy finalizing the release of Cask & Cream as well as some other projects. I do hope that you have copped your copy of Cask & Cream, if not there is still time. 🙂 Kindle-Cask & Cream

What do y’all think of Mr. Craig thus far?

Follow Bestselling author of The Crew Series on WordPress.com