My trainer would be very upset at me but he will just kill me next week, moving on.

One day away from a very special day in the last days of 2015, well actually in roughly 4 hours because the day is pretty much gone. At the stroke of midnight, it will officially be my birthday. That’s right, this wonderful year of 2015, I will be thirty-five years old. For some strange reason, the desire to cook, bake, create, and so much more has been going through me.

The family of course wouldn’t complain a bit, seeing as though they are the test subjects. Today I decided to try my hand at some praline/candied pecans in the crockpot. Why on Earth did I want to do that? Well Pinterest has become one of the best hobbies I have ever taken up. Besides writing, of course… LOL.

I found this recipe and I couldn’t help myself. Plus it’s my birthday and I wanted some. Going to the mall to pay $30-$40 for medium sized cone bags just didn’t sound like an option. Especially since, I see myself as being quite talented in the kitchen department. Have I had some epic fails when trying out new recipes, of course, who hasn’t? But the great accomplishments are so much better.

Therefore, I want to share with you my good praline/candied pecans.

I doubled the whole recipe and added cinnamon just because.

Beat the egg white until frothy, add pecans mixing them well with the frothy egg white, add remaining ingredients, and mix completely. Spray crockpot with nonstick oil and add pecan mixture. Cook on low for 3 ½ hours, stirring every 20-30 minutes. Afterwards spread mixture on cookie sheet covered in wax paper. Spray paper to be sure it doesn’t stick as it cools. Be sure to separate them as they cool. Enjoy. 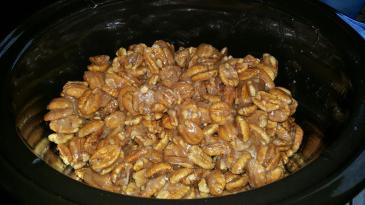 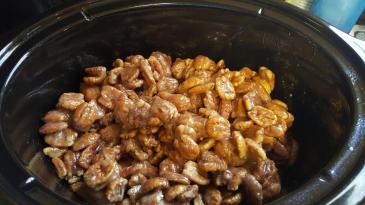 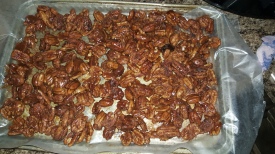 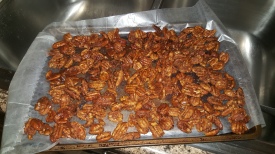 I will post some of the other recipes in the morning. I am officially tired now.